Kivy 1.9 has just been released! This has been a long time in the making, for no very good reason, but now you can take advantage of all our many new features in the stable branch. You can find the full changelog at the official mailing list announcement.

This big release includes almost 2500 new commits (about 30% of the total in Kivy!) from nearly 100 different contributors, including both significant changes and many smaller fixes. I’ll showcase a few of the most interesting ones below; these are also listed in the changelog above, along with more information about the many other changes.

One of the most major internal changes is a shift to using SDL2 as our window and other backend provider on almost all platforms - only Android still uses the old pygame/SDL backend. This shouldn’t change the external user API at all, but directly makes available features that Pygame lacked such as proper support for high-DPI displays and the ability to retain an OpenGL context on resize (previously lacking in Windows and OS X), as well as resolving some old Pygame related bugs and hopefully making further low level customisation easier in the future. Although this doesn’t change at all how you interact with Kivy, it’s a big improvement behind the scenes. This also means that Pygame is now deprecated on platforms where SDL2 already works; we’ll continue to support it for a while and it’s unlikely to stop working even after that, but it’s no longer a focus.

These images show the difference in Kivy rendering on the same (OS X retina) screen, first with the new SDL2 high DPI mode enabled so that Kivy has full awareness of the true resolution, and second letting the operating system scale up a smaller rendered result - the latter is default for applications that do not declare DPI awareness, but Kivy will now always render properly as in the first image. The difference is dramatic, and we’re glad to be able to properly support these resolutions. This improvement is currently enabled only on OS X, but the equivalent Windows fix will be merged shortly and the behaviour should already be correct on Linux.

A different change that may be more directly useful in your applications is the new EffectWidget, which behaves as a normal RelativeLayout but also lets you add one or more shader effects to its rendered output. The API is designed to make it very easy to create simple effects even without knowing about GLSL, in a way that can easily be combined with existing applications.

This above screenshot demonstrates the EffectWidget via one of the new Kivy examples; the kv code of the left and right is identical, except the right hand side includes colour mixing and pixelation effects. Since these are applied at a very low level they are very efficient (although not optimised for too many effects at once) and can be applied even to video or moving scenes such as in games. 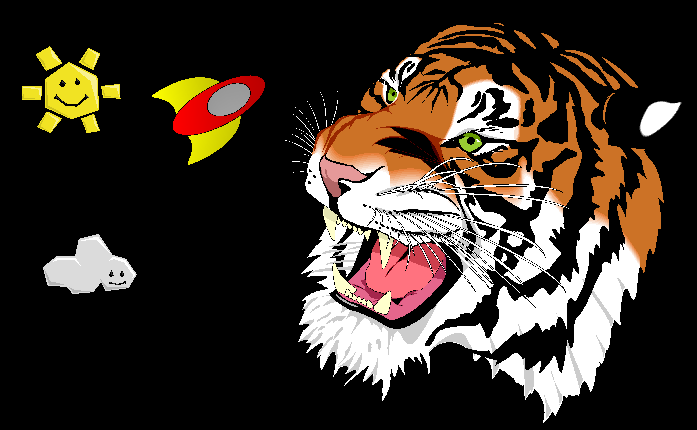 One feature that has been heavily requested by users is SVG support for Kivy, and preliminary support is included in 1.9! This is still experimental and currently supports only Python 2, but much of the work has been done and even complex SVG images are reproduced well. The above image shows one of the new SVG examples, including the famous tiger.

There are also some nice new features that can’t be captured so easily in a screenshot. One is the addition of a rebind option to Kivy properties. This resolves a problem that arose with code like

The problem here was that kv could only bind automatically to the first value of self.some_ref, so the text of the MyButton instance would never update, and it is difficult to improve this internally without dramatic slowdowns from checking if many objects have changed. The new rebind option makes it possible to enable this second level of binding in select places where appropriate; it won’t be necessary or useful to everyone, but it’s a convenient feature when really necessary.

Other new features include a new, faster video provider via Cython and ffmpeg, Window modes to detect and react to the presence of a software keyboard on Android, an internal rewiring of focus handling for widgets, and many many other bugfixes and smaller new features.

Thanks to all our contributors, and enjoy the new release!