A natural question when people hear about Kivy as a way to create Android apps in Python is…what can you do with it? Is it performant enough for games, can you call the Android APIs, do all apps look the same? One of the best resources for these kinds of question are existing apps, and in this post I’ll give a quick impression of three of my favourites. This is obviously highly subjective, but I’m focusing in particular on features of technical interest, apps that push Kivy beyond what’s normal to show what it capable of.

If you’re interested in other examples, there’s a fairly extensive (but far from exhaustive) list on the Kivy wiki, including winners of our programming contests and many contributions from users. If you’d like to make your own apps in Python, check out Kivy (which also runs on Windows, Linux, OS X and iOS) and python-for-android (which can also package non-Kivy Python apps).

I’ve put Boardz first because it’s my single favourite Kivy app. It’s actually a work in progress (and in fact hasn’t been updated for a while), but is already a fun game showcasing some of Kivy’s more impressive performance potential.

Boardz homescreen (left) and gameplay (right). The black ring on the right is the input circle controlling rider posture.

Boardz is a snowboarding physics game; you control your snowboarder by touching the screen, then moving your finger with respect to its initial position to control your posture; quick movements throw your weight around and can cause you to jump, spin, or fall over, while just positioning the rider differently helps you to pick up speed or navigate barriers. The objective of the game is to get to the end of each stage, with different obstacles including slopes and jumps, collapsing structures, falling rocks, or even multidirectional gravity and rocket boosters. You can fail if your head collides with another object with too much force, or if you simply get stuck and can no longer reach the finish.

What’s immediately impressive is that all this runs well as a Python powered game running on a smartphone. It achieves this by being built using the KivEnt game engine developed by Jacob Kovac, one of Kivy’s core developers. This entity based system lets you write game code in Python but internally is highly optimised in Cython, using Kivy’s OpenGL API extremely efficently as well as interfacing with the popular Chipmunk Physics engine.

Boardz betrays its in-progress nature in other ways; you can see in the above screenshots that its UI isn’t very polished, and in this sense it’s the worst of the apps I’m showing here. However, it makes up for this with its surprisingly engaging gameplay, and a breadth of entertaining features not showcased here, including leader boards, racing your ghost, and different riders with different physics attributes.

A final technical feature interesting to Kivy app developers is that Boardz includes ad integration. Regardless of your feelings about ads themselves, the ability to use them is a major feature enquiry from new Kivy users. The problem here is that integrating with a normal ad provider normally requires adding to the Java components of your app, which it may not be immediately obvious how to do from Python. There are actually a number of resources for this nowadays, with a key point being that python-for-android tries to make it easy to include extra Java code, with which you can interact from Python using Pyjnius. KivEnt’s implementation, pictured above, is a nice demonstration.

Kognitivo is perhaps the single most polished Kivy app on the Play store, being relatively complex, extensively customised, and exhibiting a number of nice Android API interactions. It is also (deservedly) possibly the most popular Kivy app on Google Play. 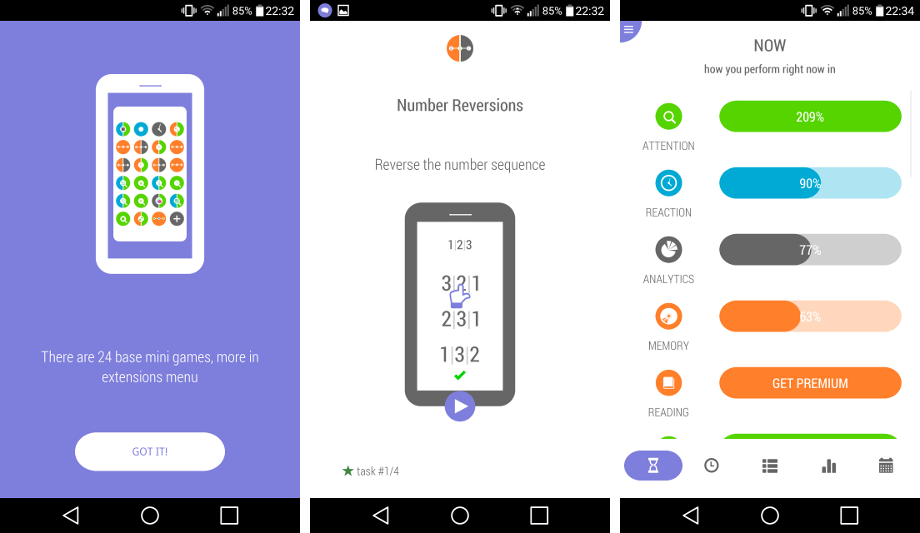 Kognitivo is a brain training and performance monitoring app. The basic structure is to perform a series of simple exercises intended to test different aspects of cognitive performance, being rated on accuracy and speed, and with the results compiled over time in order to detect and act on trends.

As I’ve said already, the nice thing about Kognitivo is its huge amount of polish. It is extensively themed such that no trace of the Kivy defaults remains, runs extremly smoothly, and includes many nice animation tweaks (unfortunately not captured in screenshots) to feel responsive and active. 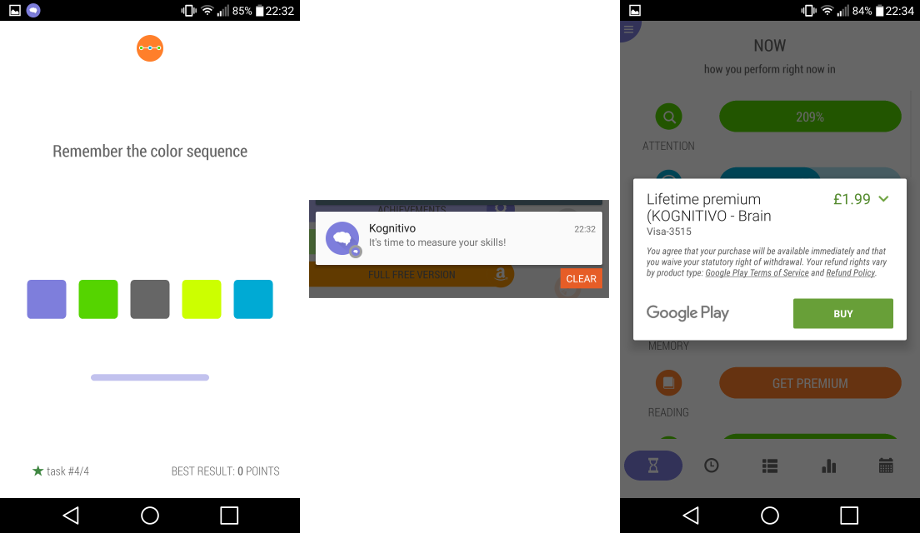 On the technical side, Kognitivo exhibits a number of features not normally included in Kivy applications but possible through interaction with the Android API via some Java code and/or the aforementioned Pyjnius. These include notifications, interaction with your calendar, and in-app purchases.

The author of Kognitivo, Sergey Cheparev, has his own writeup of Kognitivo’s development on his blog, including discussion of the advantages and disadvantages of Kivy development, and of the experience of putting together all these features. This is a great resource on its own; I don’t agree with some of the author’s criticisms and some of Kivy’s features have been improved since then, but it’s an excellent overview of the experience. Most of all, he enthusiastically captures some of my own reasons for finding Python on Android interesting:

I think the most beautiful thing in it is to use the almightiness of [Python]’s frameworks. I used sqlalchemy and sqlite as a backend, and it worked like a charm! Python is the most powerfull language because of it’s frameworks, you can even start Django on your smartphone! It’s amazing! Or twisted for asynchro communication with server. Or nltk for in-app natural language processing. Or maybe you want make a mobile equations solver with scipy and numpy. This makes all the dreams come true.

Barly is the most recent of these apps to appear on Google Play. I’ve chosen to include it as a nice example of pulling off its concept quite well while making good use of Kivy; like Kognitivo the app is themed very differently to Kivy’s defaults (though it doesn’t look like a normal Android app either), and is generally well put together. 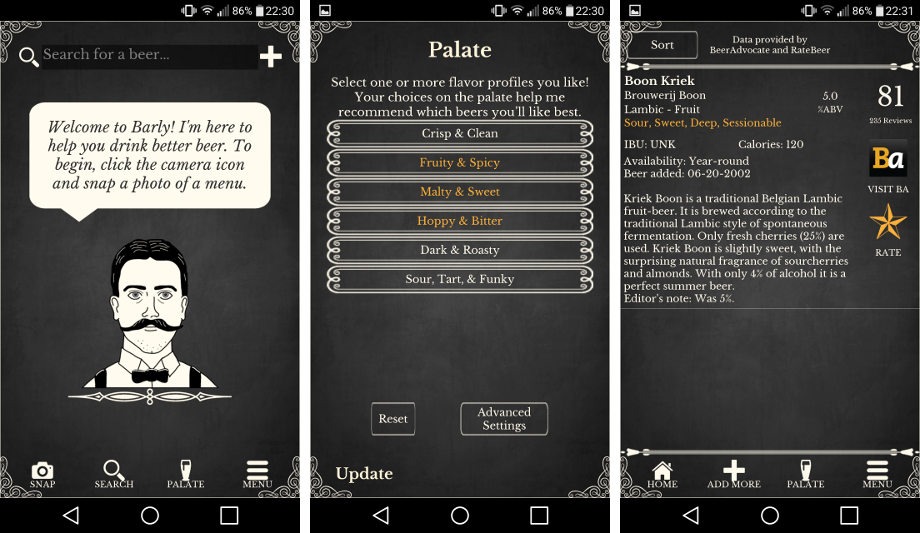 To quote its Google Play blurb, Barly is ‘your personal beer expert’. It provides a convenient interface to browse beers via data from standard popular websites, and according to your description of your own palate. Barly’s most interesting feature is the ability to take a picture of a beer menu and have it automatically detect what beers are listed, followed by downloading information about them to help you choose. That kind of image analysis has to be tricky, but actually didn’t perform badly when I tested it.

The interface to this functionality is quite nice, switching to the Android camera app to get the image before uploading it to a server for processing (during which you can input your preferences). This functionality is possible with Pyjnius as mentioned previously, but actually in this case is an API also exposed in pure Python by Plyer (another Kivy sister project, wrapping platform-specific APIs in a Python frontend). Not all APIs can be conveniently exposed this way, and actually Barly may not even be using this particular method, but it’s a good example of functionality that can be achieved with Kivy in a particularly cross-platform way.

Beyond this, Barly does not make such wide use of the Android API or unusual Kivy features, but nor does it try to; it is a nice example of a complete and self-contained Kivy app using the power of Python for an unusual and interesting goal.