I’ve recently been working on a significantly revamped version of python-for-android, the Kivy-project tools that take a Python program and package it - along with any dependencies and the Python interpreter itself - into an Android APK that can be run and distributed just like a normal Android app. This rewrite is driven by the problem that although the current python-for-android is fairly robust as far as the build process goes, it’s quite set in its ways and hard to modify to make large changes such as to support backends other than Kivy.

To this end, the revamp project has several major goals:

Each of these is individually a popularly requested feature, and this is a great opportunity to go for all of them at once!

I’m making this post to announce that the python-for-android revamp project has reached a usable state, with several of these goals either implemented or significantly advanced, and all of them at least made much more accessible. The core change is that all of the original toolchain has been rewritten in Python, with the initial structure based on the recent Kivy-iOS rewrite. It’s also much lighter, all heavy pygame stuff is downloaded on demand instead of built in, and is designed to be accessed by a single set of commands and the new python-for-android executable rather than by the separate invocation of different scripts in different places. I won’t go into the technical details here, but you can find the (WIP) documentation temporarily hosted here. If anyone would like to test it you can try the instructions there, but the project is in an experimental state right now and it’s likely you may encounter bugs or missing features, the current focus is ironing these out. I’m very happy to discuss these on the kivy-users mailing list or #kivy irc channel on irc.freenode.net.

Another of the core goals of this rewrite was to support multiple app backends; in Kivy’s case in particular we want to move from Pygame to a new SDL2 bootstrap, but this could also include support for other Python module backends. As of now, the new python-for-android supports the old Pygame bootstrap mostly as before, but also implements an SDL2 based PythonActivity that works very well with Kivy - highly anecdotal testing found, amongst other things, app start time reduced to 60% of what it was with Pygame. It also simplifies maintenance as SDL2’s java components fulfil the same role as those maintained in the Pygame backend, but no longer require much special treatment as functionality such as touch interaction and pausing are now accessed with the SDL2 api just as on desktop platforms.

Further, python-for-android can now build non-Kivy apps! The first project with this support built in is the Vispy scientific visualisation library. This uses the same new SDL2 backend but Kivy is not involved, and the build process does not use Cython (unlike with Kivy); instead, SDL2 and OpenGL are called entirely with ctypes, using pysdl2 and Vispy’s own gloo wrapper respectively. I didn’t even have to patch things much for this, Vispy is mostly self contained and already quite platform independent, barring a couple of possible small bugs and a hack to avoid the lack of a supported font provider on Android. Vispy also uses numpy heavily, but this was already supported by python-for-android and seems to work fine. The Vispy support is itself quite experimental and there are some performance issues that will need resolving, but it was very simple to set up with the new toolchain. Here’s a screenshot of one of Vispy’s 3D examples running on Android - there are a few small visual artifacts, but I think these are small bugs in Vispy’s OpenGL ES 2 support that the Vispy team are actively addressing: 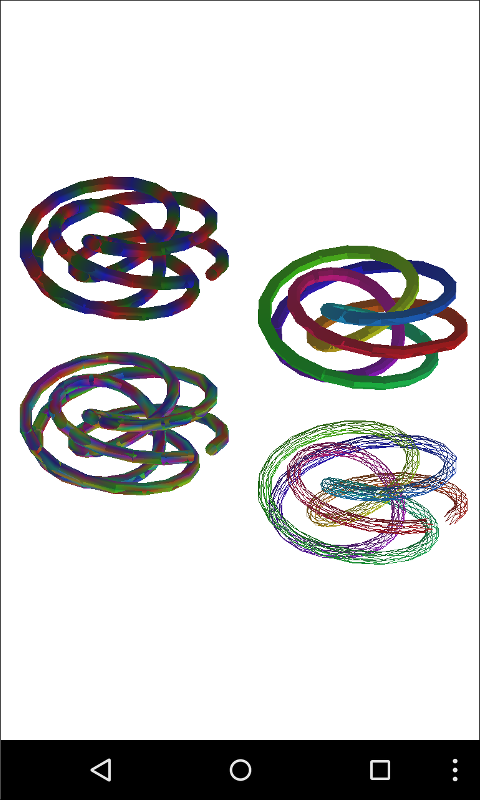 Support for binary distribution and multiple architectures are both partially implemented but (at the time of writing) not yet working. However, the toolchain is built around them, so there should be no major issues. The initial idea with binary distribution will be to simply make available a number of prebuilt distributions (i.e. Android projects with the Python interpreter) that include common dependencies, so that when the user adds modules as requirements when calling python-for-android they can automatically be checked and an appropriate choice downloaded, with this process being transparent to the user and not requiring any special options. This should not only make many builds faster but also work on Windows, one of our most requested features but something that was not possible when the toolchain required that everything be locally compiled. Likewise, the toolchain has semi-implemented support for multiple architectures internally, but none other than armeabi are yet supported and there will be bugs to work out when more are enabled. Still, these will (fingers crossed) be things to look forward to in the relatively near future.

I should note here that this model of binary distribution is what I initially targeted as a natural extension of python-for-android’s distribution system - although we never made much of it, the first step is already to build a standalone android package which later can be distributed separately and populated with app details by a user, and the above just involves making such prebuilt distributions available to download and use automatically. I found more recently the method of the pybee project/Toga toolkit’s Python-Android-template. This is a similar idea (built by a modified python-for-android) but implemented much better as a standalone project with app details populated by cookiecutter and the packaging of the user’s Python modules taken care of using ant itself, the normal APK build and deployment interface - I didn’t know this was even possible! This means that the user can just write their Python code, drop it in place, and run the APK build, a very neat process. It should be quite easy to modify python-for-android’s dist output to easily create such templates, its dist system is functionally the same thing with a different and less standard-Android interface, and I hope that doing so could make it even more convenient for users to build and distribute different kinds of Python apps.

This leaves the elephant in the room, support for Python 3 on Android, which is perhaps the most requested feature for Kivy itself. The new toolchain makes significant progress on this in a couple of ways. The first is by removing hardcoded use of Python 2, so that now (barring remaining bugs) a Python 3 build should be well behaved once a recipe and appropriate Android patch set are added. The second is that the old Kivy Android bootstrap probably needed significant changes to support Python 3, but this is sidestepped entirely by moving to the new SDL2 backend which should have no issues supporting Python3 more or less the same as on the desktop. However, the missing link here is still actually being able to compile Python 3 for Android, and I don’t yet know how to do this. Some of Kivy’s main Python 2 patches come from this site, but this has Python 3 patches only up to 3.2.2 and it would be ideal to target 3.4 or 3.5 (and to be able to support new versions as they appear). I’ve looked around and seen a few different discussions of this, but I’m not sure what’s the best direction to try. If anyone has any information about places to find more up to date patch sets I would be very interested. I can’t make any other predictions about this as I don’t know much about the Python compilation process or what difficulties might be involved in doing the work we need.

That’s all for now. I’ll note again that this is an initial announcement of the new toolchain; I hope that people may be interested to look and try it, and it should support most of what the old toolchain does when it comes to compiling Pygame APKs, but there are likely to be bugs and missing features particularly surrounding (but not limited to) the new additions. If you’re interested in making this toolchain work with other modules or backends, or just have any questions, comments or criticisms, let us know! If you want to keep informed, watch this space, I’ll make further announcements as things develop. If there is developer interest and people start switching from the old toolchain, I hope development will speed up a lot and quickly approach proper feature parity.

tl;dr (I was told I should have one): Kivy’s python-for-android build tools have been revamped to have a better interface, build apps based on SDL2, build non-Kivy apps (currently Vispy apps), and be more extensible. Further semi-complete features include binary distribution, Windows support, and multiple architecture targets. Python 3 is brought closer but needs direct compilation work.